Jerry lays down that solid rhythm that gives FOG its drive and groove. Born into a musical family in Whitefish Bay, Wisconsin, Jerry’s father was a talented musician and band leader who toured internationally.  Playing in High School and with his father’s bands greatly influenced Jerry’s playing.  He is a graduate of Milwaukee’s prestigious School of Understated Drumming where drummers are taught to be felt and not heard.  His playing has been influenced by many of the early rock drummers who tastefully bended their jazz backgrounds into driving rock grooves such as Dino Danelli, Charlie Watts, Mitch Mitchell and John Densmore and modern jazz artists Jeff Hamilton and Peter Erskine.

He moved to Colorado 35 years ago and enjoys the climate as he is an avid bicyclist.  He also collects and restores vintage Gretsch drums and is proud of a kit he originally purchased over 50 years ago.

Jerry met Greg in 2001 and started playing with him shortly thereafter. 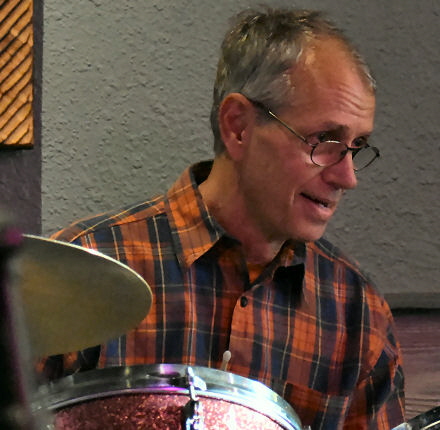